Michael Botur’s work grabs you by the throat and won’t let you go. In True?, the
Whangārei writer’s second short-story collection, we get up close and personal with a
welter of struggling, striving, forgotten, neglected, complicated, likeable, unlikeable,
smart and, often despite themselves, charming characters, each muddling his or her way
through life in today’s Aotearoa.
These stories dwell on moments of loneliness and regret in prose that is beautiful in its
frankness and charming in its understated humour. In Because I Love Him, we watch as,
maddeningly, a young girl is blind to the tragedy she is making of her life, yet we’re pulled into her story partly because of Botur’s lovely, inviting prose: “We lurch home on drunken streets, waves of tarmac lapping our feet.”
Botur is a master of voice and tone. His stories throb with what feel like real people, real
conversations, real moments of pain and hope, misunderstanding and reconciliation, remorse and surprise. And that’s the magic of this collection – what feels like real life can be so lovingly crafted and captured in all its minute detail. As we read these disparate chronicles of all manner of New Zealanders careering from disappointment to intimacy and back again, we’re left wondering how much of Botur’s content is taken from real life and how much is a crafted lie – and why this distinction matters.
TRUE? SHORT STORIES, by Michael Botur (NZShortstories.com, $25) 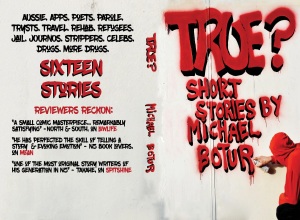 Poor and depressed, the only place we could afford to holiday was among the memories in our heads. But the deeper inside our brains we went, the less we wanted to come back.

A violent jailbird struggles to go straight in the world of cold corporate culture.

A trio of students are stranded together when the city empties out over summer.

Because I Love Him

Love, obsession and dependence in the grimy drug underworld.

A hotshot reporter is confronted with the biggest story of his career – but he’s damned if he publishes it and damned if he doesn’t.

A dad and son are on a healthy road trip across Australia which should help to detox dad – except, Dad’s struggling to get off drugs, the trip has reached a dead end, and things are happening Mum definitely does not need to know.

When 60 year old Sallyanne suddenly finds herself dumped after decades of marriage, she looks at how much life she has left and makes a hard decision about whether to move on – or not.

A young hoodlum tries to finish his community service while his partner is at home pregnant. When he gets a chance to leave his family and escape into a dream relationship, should he run from responsibility or keep the cuffs on?

The Sword of Damocles

An abusive boss, wife and burglars all take advantage of me – that is until I discover certain power I can hold over them. Now the tables are turned – and I’m going to make the most of it.

Their children having moved out, Bill and Frances download a risqué app on their phones which could rejuvenate their sex life – or wreck their reputations.

Kiss You While You Sleep

Medical student Maya and her man love getting high on any drugs they can access – especially anaesthetics. The problem is anaesthesia may make their hearts stop – but Maya never will.

The story of how our literary society reacted when one us was thrust into the spotlight and the rest of us were left in the dark.

Before Carl and Lydia experienced heart failure and collapsed under palm leaves in a black tropical cloud made of searing, slapping cold raindrops 1400 metres up a muddy volcano, they met, forgot about each other, then years later fell into each other’s embrace.

Go underground and you get exclusive access to the hippest parties and the coolest celebs– so what’s the point of ever surfacing?

I’m in trouble. I’m forced to tutor refugees. I’m expected to make them forget war-torn Africa. Instead, violence reaches across the world and I become a disciple of darkness.

One’s a failed businessman. One’s a gigolo. One’s geriatric. One has the brain and body of Frankenstein. They’re all strippers. Meet the world’s most unlikely children’s entertainment troupe.

How To Publish a Badass Book on a Budget

Sure there were 100 reasons to turn back and wait for some angel publisher to pluck me out of obscurity.

But I looked at the past risks I’d taken with all my other books.

To sell books on October 23, I had to raise awareness of TRUE? through lots of marketing on a shoestring budget. I used a tonne of tweets, Facebook updates, Mailchimp messages, Neighbourly, nagging, and lots of hustling at creative writing events.

To have the book ready to sell, I had to print paperbacks, posters, flyers and bookmarks then officially launch it all.

To birth my book in the best way, I had to utilise my own performance poetry skills, a strong speech and a little help from my friends, the Improv Mob, who performed hilarious literary theatresports at the Whangarei launch on October 10.

To afford to have the books printed, I had to run an August-to-September GiveAlittle crowdfunding campaign for a very humble print run costing $1500.

To get the guts to run ANOTHER GiveALittle crowdfunding campaign – having run a successful campaign less than a year before – I had to watch a lot of Henry Rollins vids to convince myself my art was worth the cost.

To have stories to put in TRUE?, I had to write late at night, when the rest of the world was partying or sleeping, writing draft after draft, sitting uncomfortably, ruining my spine, staring at a screen with dry eyes in black pits in my face, sacrificing sleep.

To design the cover in May and June, I had to ask around for the right graffiti artist who could spraypaint the lettering on a wall for me.

To show the prospective taggers what I envisioned for the cover, I had to mock up shitty demos in Microsoft Paint.

To spraypaint the right wall, me and my artist had to find a building we could be in control of without getting moved on (unsuccessful, we settled for my spraying my own garage instead).

To save money, I had to tell the tagger Sorry, bro: I’ll have to do the graffiti myself, on my own garage, with my own design, on plywood which wouldn’t even stick to the garage wall.

To spray directly onto my garage wall in an area with light instead of shadow, I had to find a patch where the thin winter sun hit the wall at precisely 4.57pm. By 5.02, the light was gone and it was too dark to photograph.

To save money on a model, I had to dress up and pose for my own book cover.

To get the giant 2m x 2m tag off my garage I had to get on a stepladder with chemical paint remover and steel wool. It didn’t work. A waterblaster was next used. The blaster ripped off the outer layer of garage cladding and turned my lawn into an impassable, flooded swamp.

To get the stories polished – and without budget for a professional manuscript assessor –  I had to nicely ask three bookworm friends and pay them with karma.

To incorporate my friends’ feedback, I had to look at the stories first in Courier font, then on Kindle, then printed, hacking and slashing, trimming and red-penning thousands of unwanted words.

To find ONE perfect graffiti font, I had to download twenty. To find review quotes for the back cover, I had to trawl through my old book reviews, including the vicious, anxiety-inducing ones (see Landfall Review Online).

To get a cool blurb saying ‘Sixteen Stories’ on the back, I had to write a fresh story at the last minute (My book couldn’t be marketed as ‘fifteen stories’ – where’s the catchy alliteration?).

To tell the tale of an aspiring reporter damned if he publishes a story and damned if he doesn’t, I had to spend a year chasing ambulances for $18 an hour.

To see through the eyes of a burglary victim dangling the Sword of Damocles over his oppressor, I had to get my stuff stolen.

To share the story of a hipster scenester looking for immortality underground, I had to spend nights on Ponsonby Road going from glamorous gallery to party to pub.

To spin a yarn about a tutor turning devil’s disciple I had to teach refugees in Roskill… then let my imagination run wild.

To overcome imposter syndrome, I listened to the art. If a piece of art demands attention, give it attention. Expect anxiety. Take risks.

Sure there were 100 reasons to turn back and wait for some angel publisher to pluck me out of obscurity. But I looked at all the past risks I’d taken with all my other books. If I could do it before, I could do it again.

Score yourself a copy of TRUE? at Unity Books in Auckland, email mike@michaelboturwriter.com or use the order form at NZShortStories.com.