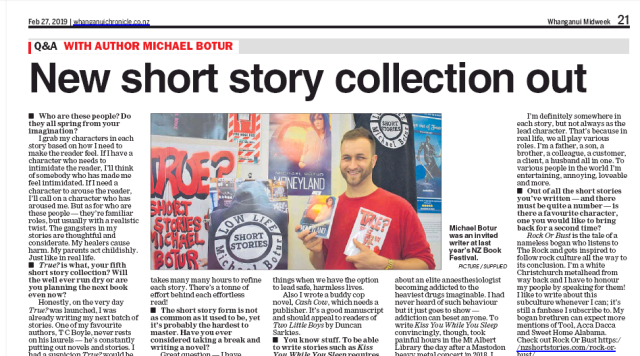 Don’t try and compare Michael Botur with any other author.

The old promotional blurb: “If you liked … you’ll enjoy Michael Botur” just doesn’t apply.
He’s in a league of his own, but there’s no denying he should be mainstream. Everyone should have access to this author’s work.
His tales are gritty, gutsy and gripping … there’s no doubt you’re inside the head of a master storyteller.
True? is a collection of stories, honed by the writer’s skill to a jagged edge. From the street art styled cover to the content, this book — if you’re reading Botur for the first time — is like no other.
I loved it. Wandering through stories, picking my way, arms outstretched, through the occasional dark passage, but finding bright linguistic gems winking in the gloom — “Instigating applause with frantic hummingbird hands” — there are dozens of such nuggets, scattered at random, each a precious moment.
First person, second person, third person, from different gender perspectives, Michael Botur’s talent shows a skill broad, diverse and still very focused.
He has mastered the art of the short story, letting one sentence say so much, giving his word-people substance and keeping their dialogue (or monologue) true to character.
The authenticity is so scary, you wonder where this man has been and what demons followed him home.
His stories — their settings, plots and characters — have a strong whiff of reality. They are either well researched or the author has been there, making for an interesting juxtaposition of worlds: the one in which he writes and the pages he inhabits in his many alter egos.
I liked every story, discovering new things as each facet caught the light and flashed its gaudy meaning. The girl who sacrificed everything for her druggie boyfriend, because she loved him. The boy and his dad who escape into the Aussie outback, away from alcohol, drugs and the threat of deportation, where the reader sees their humanity struggling to surface. When we see it, it’s the normality that jars the most.
Who is Michael Botur and how does he do it?
How does he slip into the soul of a Med student, employing vernacular so convincing you almost want to make an appointment? It’s as if he astral travels into the lives of others and becomes them long enough to be able to write about them, as them.
Don’t anticipate happy endings, or any obvious conclusions to Michael’s stories. They’re as unpredictable as they are entertaining. Just read and enjoy. Savour the tale, the language, the imagery and the privilege of being able to read them.

Who are these people? Do they all spring from your imagination?

I grab my characters in each story based on how I need to make the reader feel. If I have a character who needs to intimidate the reader, I’ll think of somebody who has made me feel intimidated. If I need a character to arouse the reader, I’ll call on a character who has aroused me. But as for who are these people – they’re familiar roles, but usually with a realistic twist. The gangsters in my stories are thoughtful and considerate. My healers cause harm. My parents act childishly. Just like in real life.

True? is what, your fifth short story collection? Will the well ever run dry or are you planning the next book even now?

Honestly, on the very day True? was launched, I was already writing my next batch of stories. One of my favourite authors, T C Boyle, never rests on his laurels – he’s constantly putting out novels and stories. I had a suspicion True? would be unappreciated and no matter how much effort I put into raising awareness of the book, it wouldn’t always end up in the hands of everyone who’ll appreciate it. If I have to write ten collections of stories before there’s more awareness of what I offer readers, so be it. But yeah at the end of 2019 I’ll be putting out a sixth collection of stories. I have 20 draft stories so far and it takes many many hours to refine each story. There’s a tonne of effort behind each effortless read!
The short story form is not as common as it used to be, yet it’s probably the hardest to master. Have you ever considered taking a break and writing a novel?

Great question – I have already published one young adult sci-fi dystopian novel, Moneyland. And I have a very gritty novel called Crimechurch which is being published this year, hopefully by a certain boutique American small press – though if they don’t publish it, I’ll just publish it myself. Crimechurch explores the male code of violence and asks why young men do self-destructive things when we have the option to lead safe, harmless lives.

Also I wrote a buddy cop novel, Cash Cow, which needs a publisher. It’s a good manuscript and should appeal to readers of Two Little Boys by Duncan Sarkies.
You know stuff. To be able to write stories such as Kiss You While You Sleep requires incredible subject knowledge. Did you write that story because you know all that medical stuff, or did you research it to write the story?

There is a collection called Next Wave: America’s New Generation of Great Literary Journalists published by one of my favourite writers, Mike Sager. In this collection, a writer named Jason Zengerle wrote about an elite anaesthesiologist becoming addicted to the heaviest drugs imaginable. I had never heard of such behaviour but it just goes to show – addiction can beset anyone from Average Joe to academics to athletes. To write Kiss You While You Sleep convincingly, though, took painful hours in the Mt Albert Library the day after a Mastodon heavy metal concert in 2018. I just wanted to eat KFC and drive home but instead I sat on the same chair for hours getting the story as authentic as possible, whittling a 9000 word draft down to 6000 words.

Readers will probably think they’re getting to know the author through your stories? Is Michael Botur in there anywhere, or is he in the background, manipulating?

I’m definitely somewhere in each story, but not always as the lead character. That’s because in real life, we all play various roles. I’m a father, a son, a brother, a colleague, a customer, a client, a husband all in one. To various people in the world I’m entertaining, annoying, loveable and more. I think everyone plays all these roles all at the same time.
Out of all the short stories you’ve written — and there must be quite a number — is there a favourite character, one you would like to bring back for a second time?

Rock Or Bust is the tale of a nameless bogan who listens to The Rock and gets inspired to follow rock culture all the way to its conclusion. I’m a white Christchurch metalhead from way back and I have to honour my people by speaking for them! I like to write about this subculture whenever I can; it’s still a fanbase I subscribe to. My bogan brethren can expect more mentions of Tool, Acca Dacca and Sweet Home Alabama. Check out Rock Or Bust  https://nzshortstories.com/rock-or-bust/ .